Every time I’ve done a market or baby show, I always get some older women coming up to me to talk about our cloth nappies. Sometimes they just want to see how they’ve changed from the ones that they used to use, sometimes they are surprised that people still use cloth nappies, but nearly every single one of them talks about how great their old fashioned cloth nappies were, and how you can’t get them any more. Often they’re surprised to hear that I think they’re great too, and that you can still get flat cotton nappies, very similar to the ones that they used to use.

Our Grand parents and parents used cloth nappies that were quite different to the ones that you might have come across today. Old fashioned cloth nappies weren’t made of modern fabrics, they weren’t shaped, they weren’t made in a range of bright colours and prints. Made just of cotton and in flat squares that had to be folded and then pinned, before being covered with a separate cover. But, they did exactly the same job as our modern cloth nappies, and really when it comes down to it, were not really all that different. 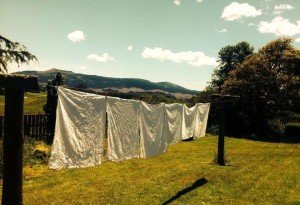 When people think about old fashioned cloth nappies, usually the first thing that comes to mind, are the white squares hanging on the line. There is something really satisfying about seeing them flapping away in the breeze, but there’s a lot more to those cotton squares than that. You might be convinced that modern cloth nappies are the thing for you, and haven’t given flat nappies a thought, but there’s actually far more to them than that, and all of those ladies who come up to me at markets, are actually onto something.

There are still plenty of people who use flat cotton nappies, rather than the shaped modern ones. As I’m sure that they would tell you, they really aren’t that hard to use and are very versatile and flexible. There are lots of different ways to fold them, which means that you can use the same nappies from birth, until you don’t need them any more, just altering the way that you fold or adding extra absorbency as your baby grows. In the past there was no such thing as OSFM nappies, or sized cloth nappies because nappies just came in one standard size. You would have needed different sized covers, the nappies themselves didn’t change and if you had more than one baby in nappies, then you didn’t need to worry about which nappy was for which baby, they were all the same. If you fancy giving flat nappies a go, then you can try different folds and fasten them with a snappi, or simply fold them into a pad and then place them in a cover. Although flat nappies have a reputation as being hard to use and complicated, in fact many ways they are actually really simple and straight forward to use. Being made of cotton, they are pretty much bomb proof, you can boil them or bleach them without doing any damage, not that you need to, you just can. If you want to make them a little different you can even tie-dye them if you like, although personally I prefer that lovely, fresh white colour.

Modern take on the old

I used flat nappies on my children when they were first in cloth nappies, they were the first type of cloth nappy that I ever tried. I found that they dried much quicker than other nappies, which is really handy when you are dealing with newborns who need changing all of the time. I actually used muslin flat nappies, as that was all I could find at the time. They were great to begin with, but as my children got a little bit older, they just weren’t absorbent enough. When I was looking for flat cotton nappies for Nappyneedz, I wanted something that worked well with snappi nappy fasteners, that dried quickly, that were nice and absorbent and that felt lovely and soft. Although I do have a few of the old red stripe nappies, they were a little bit more thick and bulky than I ideally wanted. They were also very difficult to get hold of, in a high enough quality, most that I could find didn’t last well and didn’t keep their shape. I decided to go with a birdseye weave instead. Birdseye has a slight diamond pattern to the weave which makes them nice and soft and grip they snappi well. They are also much more absorbent that muslin nappies I have tried. Ideal for both use on newborn babies and older children, just like old fashioned cloth nappies.

One of the great things about flat cloth nappies, is that they have so many uses and are so handy to have around. Although my four children are all now out of the nappy phase, I still use flat nappies on an almost daily basis. Today alone I’ve wiped up spills, cleaned a window and dried a wet cat with mine. They have heaps and heaps of uses that have nothing to do with being cloth nappies, they really are very handy. If you have a baby then there are even more uses for them, spills, burp cloths, play mats, change mats, the list goes on and on. If you aren’t completely convinced by them, you might want to think about using pre-fold cloth nappies, which are very similar, but a little bit easier to use as they need slightly less folding. 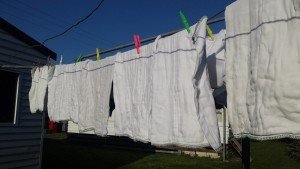 One of the absolute best things about flat cloth nappies, are how reasonably priced they are. Unlike shaped cloth nappies, you can pick up flat nappies for no more than a few dollars each, meaning that they are a really inexpensive baby essential. Have I convinced you that you really need some? You can find them on our website here.