I keep having all kinds of ideas for different cloth nappies, and every now and again I actually get the chance to actually sew some of these ideas and spend some time designing cloth nappies.  Recently I’ve been working on a brand new pull up cloth nappy.

When I start designing cloth nappies, I usually start with an idea and then think about how I could make that work.  With this new pull up cloth nappy I wanted to come up with something that would work as a full nappy, but still could be pulled up and down, to make it easier for children that just won’t sit still.  First of all I tried making a pull up cloth nappy, based on my initial ideas, and then trying it out on my own children.

After this initial stage the next stage when designing cloth nappies, would be to make a second working nappy with a few changes based on my first trial.  I had a lovely embroidery that I wanted to use, so I made a version of my pull up nappy for my youngest daughter to use, and we’ve had it in use for about six months so far.  Testing it, and testing it again to try and iron out some of the slight issues that might exist with it.

The next stage when it comes to designing cloth nappies is getting a few more people to test out the new pull up cloth nappy, and we’re just about at that stage right now.  I’ve got a group of people lined up ready to put version three through it’s paces.  Hopefully, if all goes well, we’ll be ready to launch the new nappy to the rest of you soon. 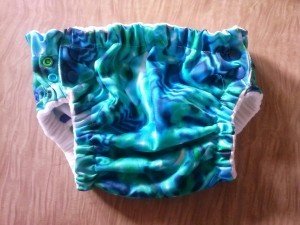 I’m working on a few more ideas at the moment, so I’ll be hopefully looking for a few more testers to help me out with designing cloth nappies soon.

Struggling with the cost of cloth nappies? Check out our Free Nappy Pack scheme and our super value nappy pack. Dismiss