Suffering from an ammonia smell in cloth nappies and wondering what is causing it and how to get rid of it?  Our tips and hints should help you to get rid of even the most eye-watering odour.

What causes the ammonia smell in cloth nappies?

I have to admit, when my oldest child was in nappies, I thought that an eye burning smell in his night nappies was just something I had to put up with. Unfortunately, I didn’t know what caused it and I certainly didn’t know how to get rid of it. I assumed that it was just because the nappy was on so long. With my second baby, I noticed that it didn’t happen until he was at least six months. Was it caused by his urine becoming stronger as he got older? Or was there something else going on. I didn’t have any problems in the day, but I know that some people can. So what causes it? In actual fact, it has more to do with solids in nappies, rather than the urine, or rather than being just the urine. 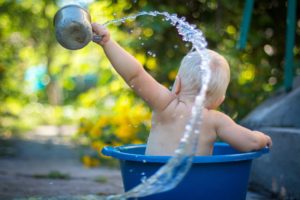 The strong smell that you can get from cloth nappies, is actually caused by bacteria. This reacts with urine and causes ammonia to be produced and that is what you can smell. This doesn’t happen overnight in the nappy, but actually in your nappy bucket. Then when you get a clean nappy wet, it reactivates the ammonia crystals and things get a bit whiffy.

What problems can it cause?

Ammonia build up creates a really nasty odour in cloth nappies, but that’s not the only problem you can have. This build-up can also cause issues for your babies delicate skin. Along with the strong smell, I also found that my son had a persistent nappy rash that I couldn’t get rid of. He hadn’t had any problems when he was younger and then all of a sudden he had a nasty rash I couldn’t shift. With a bit of investigation, I realised that it was the ammonia causing the issue. Once I had fixed the problem, the rash went away.

How to get rid of the odour

Unsurprisingly the way that you wash your nappies has a big impact on this. I found that the biggest issue was from the nappy inserts, as they retained the ammonia crystals. I started to rinse them out as soon as they were off my baby. This doesn’t need to be anything fancy, a rinse in cold water is enough to dilute the urine in the nappies and helps to stop the problem. You can either do this by running them under a tap, or by soaking them for an hour or so in cold water. You don’t have to do this for the whole time that they are waiting to be washed, just an hour or so and just in cold water. Here are some other things that can help:

I hope that this helps if you’ve been struggling with an ammonia smell in cloth nappies. If you have any questions or want to know anything else, please get in touch and let me know.